First I want you to realize when you hear of someone "passing" from some scampoo or some DIY BS do you know their use history ? , as in do they really use or is it just here and their?  It matter becouse THC does not cross over to hair easy and MOST of the fools who rant and rave about passing where not dirty to begin with.

You need regular daily use and or be a very sedimentary person to have a need when it comes to THC. Most people who passed from these Aloe  shampoos do not need any treatment and only THINK it"worked" when in fact they didnt need to do anything.

EVER SEE A PRE TEST BY THESE PEOPLE?

here are a few consultation examples

List each drug and the amounts in grams for EACH Month, for the last 3 months *

Few hits of marijuana Last use date 06/2019 IF you use THC , what is your physical activity level / weight 190 walk few miles a day

thc requires repeat use a few hits here and their wont show ,this is WHY people spread bad info about DIY " methods" claiming they work when the person didn't need anything in first place ...so YOU DO NOT NEED TREATMENT

thc doesnt cross over to hair easy, it need repeat use every 5 days at least this is why people do DIY stuff and tell people it worked,...they were never dirty your fine

A Example of a review of mac method performed for a month !

1 month ago till today: 1gram

benzo-have a prescription to klonopoins but does labcorp test for diff types as i have used a few alprazolams. Last use date 5/20/19

Any Chemical treatments in past month ?

Here are my test results I received today.(5/22)  I believe the levels might be a little higher because I have regrettably and stupidly done a bit more . Since this test (5/26) after a month of mac ) I would say that I have done a gram and a half / 2 tops. I haven’t drank codeine since February and I’m still at 400 something .. I actually already ordered the triple set.


month of mac and WAY over for cocaine , codeine and THC 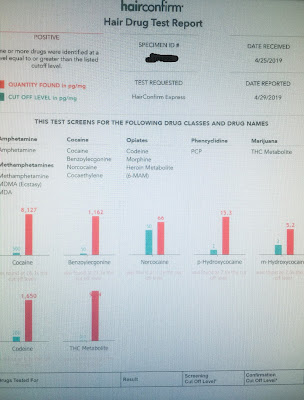 -quit 13 days prior to test, before that I had been a frequent smoker for 4 years primarily smoking with a one hitter. 14 days prior to the test I had smoked some really nice kind bud and I suppose that may have been the culprit.

-began using aloe rid shampoo and treatment 12 days prior to test. I used both products seperately 2-3 times daily until the test day. The bottle said the "desired effects" of the shampoo would work in 5-7 days mind you. I often would leave the products in my hair for 10-30 minutes at a time.

-bought afterburner short hair system shampoo from testingclean.com for 150 bucks (not promoting this product at all) and used it on the test day about 2 hours prior to testing. This stuff burnt like hell.

-took Pychemedics test, samples were taken from my head from 3 separate spots all being on the top of my head.

-in the days following the test day I had SEVERE burning of the skin on my forehead, back of neck and around my ears...most likely from the afterburner shampoo. Skin began to peel off and now appears to be good ole' dandruff!

-tested positive for CARBOXY THC with a score of 10.9pg.  HUGH AMOUNT SHOWING LOTS OF DAMAGE AND NO RESULTS

The cut off was 1pg. However, I didn't test positive for amphetimines (adderral) which I have a script for and have been taking 50mg a day for the past 5 months (i didn't inform the lab i had a prescription either). The cut off for amphetimines was 5mg.

I suppose the afterburner crap hid the adderral and not the dope-any ideas?

-bought clear choice follicle shampoo (never used it) and detoxify root clean (never used it). *not promoting these* I originally planned on using both these products since the ingredients were exactly the same, aside from food coloring in the clear choice, but ended up being fearful that they would counteract the $150 afterburner shampoo.

Hey guys. I received the dreaded call today. I failed the psychemedics hair test. They took it from my arm pit hair (both arms). I tried the Macujo method, and root clean by detox. needless to say i am now another statistic and it oes to show that NOTHING in guaranteed! Better luck to anyone else who has to endure this ruthless process. :bawl:

Daily smoker for the last 3 or 4 years... female, 5'5", 140 lbs. Last day of smoke was May 31st 2004. Thought for sure that the Company I was applying for jobs in did urine testing, only to find out when I was offered the position that it was going to be hair. Went out and bought all the stuff that everyone talks about on here and then had a bad feeling about the whole thing and figured it wasn't worth the risk of failing so I decided to turn the down the job offer. In the meantime I had purchased one of the psychedemic home tests that you mail in just to see what would have happened.

The company received my sample on Sept 21st so it was tested some time during that week and it came up positive for THC. I didn't do anything to my hair before sending it but I have always been under the impression that the test goes back as far as 90 days (90 days being tops) so this was well over the 90 day period and it still came back positive. They can't tell you levels which is bs. Guess I made the right decision not to take the job. This hair crap is no joke!!

Test #1 - Knew it was coming. Stayed clean for about 80 days (or so) and used "Totally Clean" shampoo day of test. Phsychemedics reported a positive result in excess of their scale - I blew the test completely out of the water.

Contacted lab and they refused to discuss results, or provide any documentation.

Test #2 - Still clean, but went in for a Wizz Quiz and got a surprise hair test. Phsychemedics did their best again and reported 7.9 pg. Got pissed and starting smoking again when lab again refused any reply.

Test #3 - Knew this one was coming. Stayed clean about 60 days and bought the best stuff from the most legit web site I could find. Turned out to be Testin' shampoo, Enhancer, and Finishing Conditioner. Starting to really dislike Phsymedics at this point. No results provided other than positive for MJ.

Test #4 - Not a clue, but by now I'm not taking any chances. Clean for about a month. Bought same Testin' package and Two Steps Ahead, Used MajCujo. Followed directions and used for 3 days, twice a day, for several hours each time. Test came back at 3.3 pg from who else, Pshychemedics. Burnt my skull to a crisp.

Test #5 - I'm on a mission. I disputed Test #4 and demanded a retest. Got the OK, scheduled for 5 days later. Kept on with MajCujo twice a day, went to see hairdresser friend and she gave me same stuff used to pre-treat hair before a perm or dye job. Guarenteed to strip anything. Also bought Nioxin shampoo. Used both for hours with more Testin', twice daily, right after MajCujo. Skull xtra crispy. Test failed.

By now, I'm on a first name basis with Doctor who interpets and reports Pshychemedic's results. I simply explain myself when he called the last time, (nothing to loose now) and ask what the hell is going on.

Found out that Zydot hair shampoo does not was out the chemicals in your hair. Failed hair test and lost a great job :redhot:

Hi everybody! I just wanted to post my results for anyone else who has to do this. I don't want to sound so negative (isn't that funny), but I failed my hair test. I just got the word today. I did everything I could imagine to pass, and I didn't. I did the mac method seriously at least 20 times, and even bought afterburner for $150(which is 100% guarenteed). I guess nothing is guarenteed. So now I am looking for a new job. Good luck to anyone else who has to take this test.

I failed my hair test! I did everything I could do to pass and I failed. I did Macc, shampoos, root clean and almost 3 months clean and i failed. They found high levels of THC in my hair. I wonder if they tested the right end. Good luck to anyone in this situation. Nothing is guarenteed. Now my ass will be sitting in a group with crack heads and heroine addicts because I smoked weed 3 months ago.

A big positive, failed....I tried the macujo method (by the way thanks anyway macujo, I thought it would work & I'm glad it worked for others) & I used some of that cleansing shampoo, I won't take anymore hair tests, my friend said I put too many masking agents (chemicals) which they detected & took their sweet time pullin out all of my past, I'm not going to take anymore hair tests, I'll just move on to the urine testing companies, hell, they picked up pot I smoked 7 months ago....BS...., good luck brothas & sisters :wave:


Oh yea, forgot to mention, I used nexxus aloe rid for two weeks before the test as well, I'm a white dude with dark hair so that may have screwed me, I'm not too sure that putting all of those chemicals in your hair the day of the test is a good idea, maybe do it the night before then use the aloe rid, but don't listen to me, I failed, just tryin to help....I did macujo, aloe rid, STAT cleansing shampoo all about 3 hrs before the test, it took a week for my hair to smell normal....anyway, I hope you guys pass....the company that tested it was quest diagnostics.....the doc called me with the bad info, then came the letter from the company

Posted by Hair Razor Detox at 10:41 AM No comments: