OR The HISTORY of the  2 part product that you never knew of . 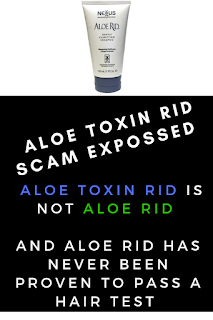 This is a educational informative and historical article .

Well its been 12 years since aloe rid  went off the market.  For most of you, all you know is the myth. You know very little of the actual history of the product and its myth as a super special shampoo .

Once apon a time their was a 2 part product  (Aloe rid) put out by a certain  hair company to strip hair product build up as a pre treatment to chemical treating hair.   The reason being you want pure hair before applying chemicals like color. They created a shampoo and a gel treatment.  first you washed with the aloe rid  clarifying shampoo which contained %.5 EDTA   and sodium thiosulfate (for treating swimmers green )  then you used the green gel Treatment which contained a slightly higher amount of %1 EDTA which is known as a chelator .

The first people to use it as a treatment for testing was in late 90s was a product called  afterburner  followed by Hair Razor.

Around 2005 I read a notice from the original makers of these products that they would no longer product it . They made a slight formula change and stopped selling it in gallons .

Around 2006 I disclosed the aloe stuff was going out of production so we stopped doing hair for a whole year to research and formulate a all new Hair Razor . While afterburner went with a name change and may have been a buy out they continued to sell shampoo under a different product name toxin wash or now just synergy detox  which i noted looked like green shampoo with tide in it .

The Start of the Weed Forum disinfo


So Test smear a new site at the time was claiming they had obtained a boat load of the original product and that you didn't want the new one which is all that was now available in small bottles.  They claimed the old formula had high propalyn glycol levels and that is what you needed and old bottles had a different bar code  all irrelevant as it was just nonsense ..but you bough it . hook line and sinker.


They promoted and still do,  that the a change in formula made the new product inefficient to clear your hair because they took away all the propalyne glycol . ( AGAIN PG IS NOT THE ACTIVE INGREDIENT  ITS EDTA.)  SO that was the creation of  the OLD FORMULA  myth.

Their was already some amount of chatter on weed forums by KIDS who think they are chemist who parroted the PG myth to the point more and more  people had their head infected with this Inaccurate information  .


This was around the 2006 when i tried to warn the weed forums that aloe rid went out of production but the forums are already infected with kids who think they know chemistry defending these made up METHODS using random item from under the kitchen sink.   They also promoted the claim the old formula with same stuff as new formula has a different and thus special bar code as part of the method .

NOW after years of me trying to wake people up they never wanted to believe me i got attack and banned from every forum and so i said fuck them all let em rot .

SO for years people went to THE ONLY PLACE YOU CAN GET THE OLD FORMULA BLAH BLAH BLAH shampoo  a product at the time was 7 bucks for small bottle they sold  this counterfeit aloe toxin ridding stuff for 35 then 50 then 75 then 230.00 before getting legal notice .

and here is the kicker

I am very familiar with the original  Shampoo and Treatment product, it was  clear dark emerald green not cloudy seafoam green. The video was recently taken down due to the legal notice .
Which they never proved they had they only showed one video with a half gallon GEL TREATMENT not the shampoo so that was a proven lie.


REGARDLESS,  THE LIE IS OVER

TESTSMEAR NEVER SOLD  THE GENUINE  SHAMPOO  ( which was just commercial clarifier shampoo same active ingredients as suave and swimmers shampoo ) AND ALL YOU  SUCKERS PROMOTING IT ON WEED FORUMS  AND YOUTUBE   CAN SUCK IT.


OBVIOUSLY  NOT in the original  bottle